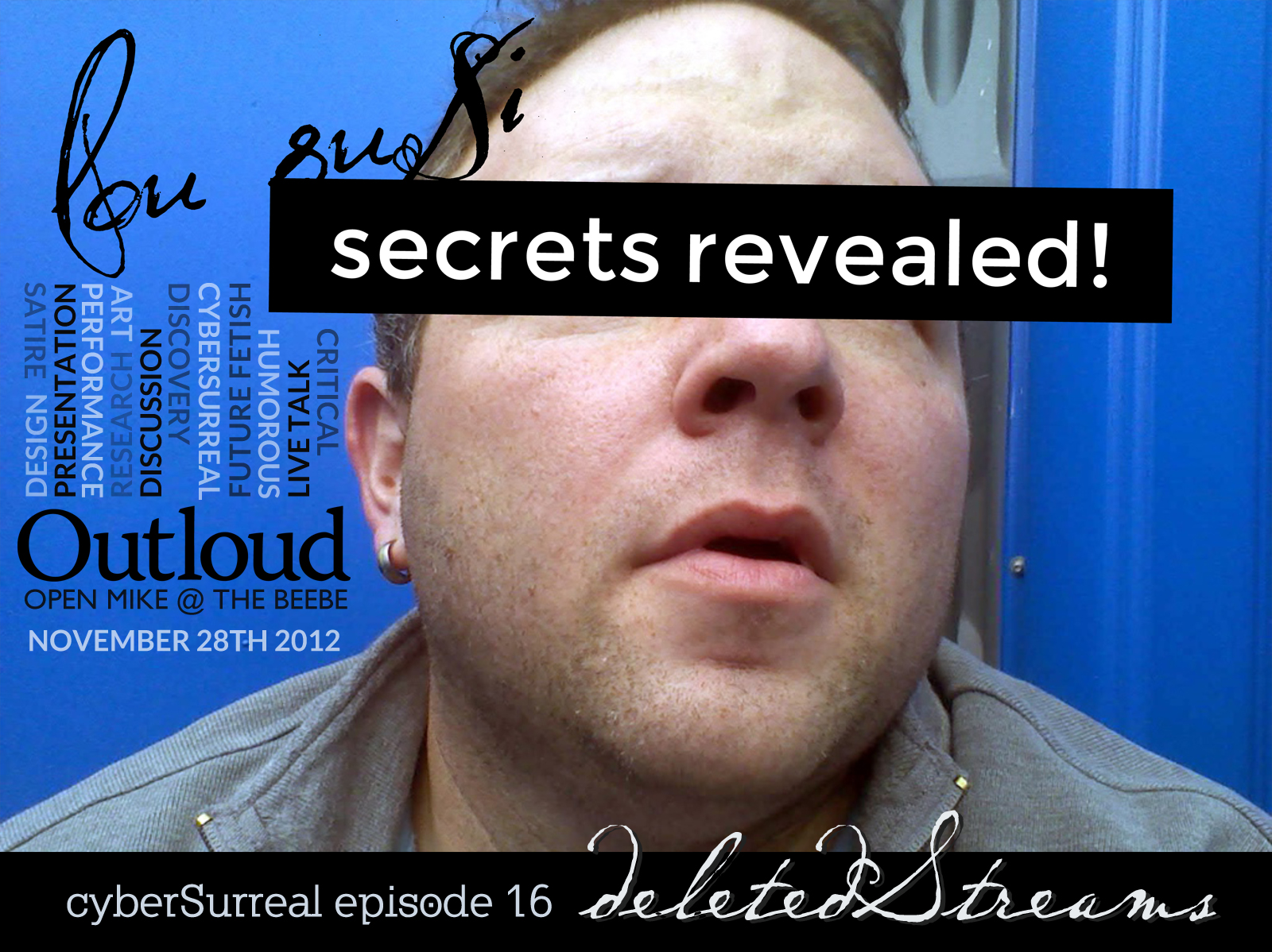 after lots of preparation + hard setup work on the old MacBook Pro — including several really tumultuous + concentrated moments of utter frustration, technical difficulty + failure — i rather successfully beat all technological odds stacked against me on Wednesday, November 28th + presented my ‘cyberSurreal episode 16 — deletedStreams’ iterative presentation number 1 to the nurturing + gracious community of my colleagues at Outloud Open Mike at The Beebe Estate in Melrose — long story short, starting with the secret sauce base presentation remains from my MFA thesis from Dynamic Media Institute at Massachusetts College of Art and Design, i put together a peformance art rendition of my critical analysis and concerns from the last 3 years of my intense research in design and technology + presented some of the main concepts, projects, research + findings through humorous storytelling, small songish interludes and smatterings of poesiac interjection — and, from my personal yet somewhat humble + semi-removed assessment of the overall evening, i feel the material was well-received + enjoyed by an ecclectic audience filled with talented musicians, orators, poets, writers, storytellers, philosophers + other near + dear mostly liberal compatriots that enjoy a slightly bent + silly view into the subconscious meanderings of the world’s last honest man barely standing 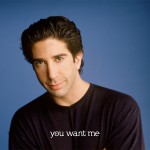 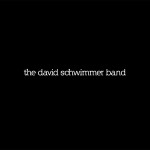 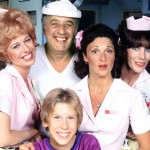 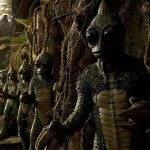 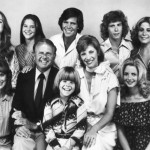 my interestingly entertaining, embedded distraction du jour for the evening revolved around a rather crazy band concept i came up with a couple of years ago — i wanted to put together { let me know if you’re interested, cuz this one could be fun } a band called The David Schwimmer Band as a sort of Bare Naked Ladies concept band that used a swindling, scammish band name convention to potentially lure unsuspecting fans of this famous television + hollywood heartthrob originally known for portraying the loveable but slightly goofy ‘Ross’ from the 90s situation comedy ‘Friends,’ more recently portraying the giraffe from the ‘Madagascar’ animated big screen film series — anyhow, the idea behind the band goes something like this — The David Schwimmer Band travels the states on their first ever national tour, there’s lots of critical acclaim, tv + radio promotional spots for various stops in key cities across the land, and tons of interviews on OWN, The View, Ellen, The Jimmy Fallon Show, E! and all the hawtest shows ‘out there,’ right? But, whenever The David Schwimmer Band actually graces the stage, they need to announce that, unfortunately, due to unforseen circumstance, David Schwimmer will not be able to appear tonight — he, of course, would send his best, maybe even sending along a short video to let the audience know just how much he really wanted to be there and let everyone know, though, that the show will still go on without him — at that point the band would start to play The Barney Miller Theme Song + introduce each player on the stage with horn hits, shuffles and all sorts of little ‘shucks + jive’ — the band would then go on to play an entire 4 hour set of television theme songs from classic shows like Barretta, Kojak, Gilligan’s Island, Bewitched, Night Court, Cheers, and the list goes on. And so, in tribute to this amazing + geniusly riduclous idea, I interspersed my own a capella renditions of some of my favorite, classic television themeshow songs, including: Alice; Land of the Lost; and 8 is Enough — my devious plan ( that actually fell through for this performance-presentation-event ) was to also present my rather infamous ‘Butterface Remix’ of The Monkees classic song ‘I’m a Believer’ including rude references to various female attributes that ‘then I saw’ at various key points throughout the chorus segments of the composition, but alas, I only got through about three-quarters of the entire presentation 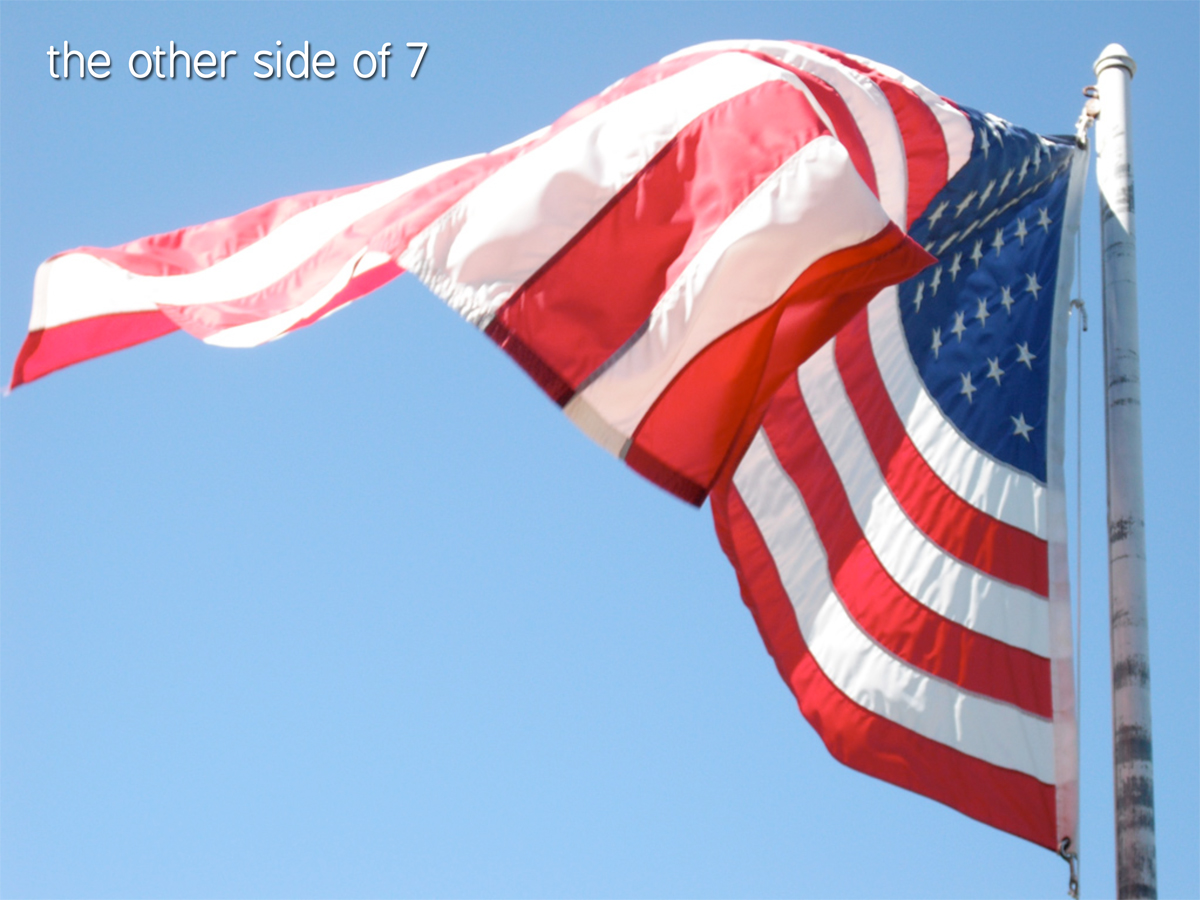 following the main setup thematics behind The David Schwimmer Band interludes, i presented streams 1 and 2 from my thesis ‘confounded — future fetish design performance for human advocacy’ as well as the first part of stream 5, one of the many ‘deletedStreams’ i propose to re-open my investigations for further research, writing and reflection — i first reported back on my intervention-like persona-based design performance testing of certain ‘found systems’ in the world for stream 1 — i then discussed my findings from the ‘deletedStream’ i call ‘the other side of 7’ in a short photo-essay format, strange observations captured at a North Shore cemetery, otherworldly + frightening perceptions of the lines and lines of tiny flags marking each soldier’s grave in a green, green September autumnal grassy gravesite lawn — i never got to elaborate on stream 8, a ‘deletedStream’ i originally planned to present after the object-oriented performance work included in stream 2 — stream 8 continued from 5 to explore some internal subconscia broiling the worrisome sentiments gathered at the site of the soldiers’ graves

i have so much more to examine, to question + wonder about, i just hope i can muster the focus to seriously scour my notebooks + photodocumentation to understand some of the more analog, truly multisensorial work i produced while in that pre-thesis phase of internal self-excavation — i still want to better understand what i might find inside, just a little deeper in — i think it might be simultaneously gentle + ferocious in there at that level — pure, yet full of blood + puss, mucus + semen